Because there's OBVIOUSLY nothing wrong with America today ... Ken Starr has found himself another witchhunt ... he wants to invalidate the 18,000 same-sex weddings that happened with same-sex marriage was legal in California. Here's the details, and a petition you can sign:

Have you heard that Ken Starr -- and the Prop 8 Legal Defense Fund -- filed legal briefs defending the constitutionality of Prop 8 and attempting to forcibly divorce 18,000 same-sex couples that were married in California last year? The Supreme Court will hear oral arguments in this case on March 5, with a decision expected within 90 days.

The Courage Campaign has created a video called "Fidelity," with the permission of musician Regina Spektor, that puts a face to those 18,000 couples and all loving, committed couples seeking full equality under the law.

Please watch this heartbreaking video now. If you have the same reaction that I did, please help me spread the word by sharing it with your friends and family ASAP:

After you watch the video, please join me and over 300,000 people who have signed a letter to the state Supreme Court, asking them to invalidate Prop 8 and reject Starr's case.
Spewed forth by Eric Broz at 00:22 No comments:

Email ThisBlogThis!Share to TwitterShare to FacebookShare to Pinterest
File Under: idiots


(I've been on quite the Todd Snider kick lately. That guy is great!)
Spewed forth by Eric Broz at 12:33 No comments:

Email ThisBlogThis!Share to TwitterShare to FacebookShare to Pinterest
File Under: Song of the Day

Why did you break?

What did I do?

I go downstairs to make coffee and hear a CRASH. 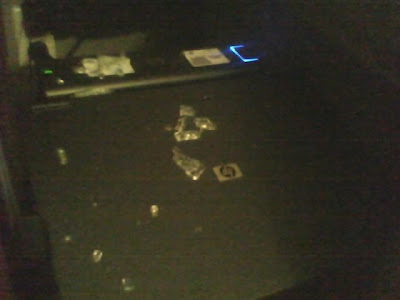 And you were gone.

And all the stuff you had on you is on the floor.

Now I have a ghetto desk. 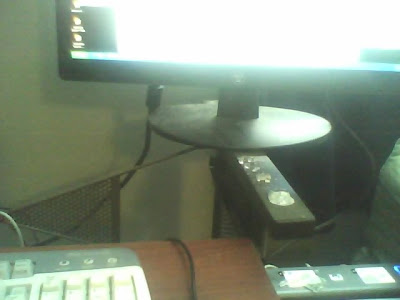 (note to self. Friday evening, when you head out to buy a new computer desk, no glass top. Really.)
Spewed forth by Eric Broz at 09:52 2 comments:

Maybe it's because I'm from the snow belt.

Maybe it's because I have a front-wheel drive vehicle.

Maybe it's because I'm not from Cincinnati. Yet.

But if three inches of snow makes a 15 mile trip take FOUR GOD DAMNED HOURS ON AN INTERSTATE ... maybe all you fuckers should just take the bus.

Yeah, I know, the crack weather teams there along the shores with their millions of dollars of technology got owned by an overgrown rodent this week who correctly predicted six more weeks of winter while all that fancy equipment called for a dusting in the Queen City ...

And FUCK ME SIDEWAYS ... but when your car dies in the midst of a full interstate highway system that's moving at the speed of snot, WHY DO YOU ABANDON IT IN THE MIDDLE OF THE FUCKING HIGHWAY?

I saw SIX abandoned cars, covered in snow, sitting in either the middle or left lane. Empty. Fucking up the already cluster-fucked traffic.

I think I might kind of know the answer to that one ... when we're all creeping along the interstate at the speed of cold snot, WHY THE FUCK DO YOU NOT LET PEOPLE MERGE WHEN THEY CLEARLY SIGNAL THEIR INTENT BY USING TURN SIGNALS?

Is being 20 feet ahead of me going to get either one of us to our destination any faster? No.

Jebus, people. It's snow. We get some every year.

Please try to figure that the fuck out before I move down there and have to resort to chewing bubble gum and kicking ass.

Because I'm all out of bubble gum.
Spewed forth by Eric Broz at 00:48 No comments:

Email ThisBlogThis!Share to TwitterShare to FacebookShare to Pinterest
File Under: Open Letters, Rants

SUBTITLE: At least my life's not boring.

So on Sunday me and my (female) roomie went out to a local establishment here in the greater Columbus area to hang with her people, as she called them ... the Steeler Nation.

And it was good.

However ... just after kick-off I noticed an absurdly hot woman (in my still-sober mind) at the other end of the bar. When I walked by her heading to the used-beer return, I was smitten.

And really, for the record, there were a lot of really hot single women at this bar, wearing jerseys or tight-t-shirts professing their love for the black and gold. More single women than single men. Seriously.

After a few curious glances, I point my infatuation out to the roomie. She says, "Oh, the one sitting next to her girlfriend, the dyke?" I said, "Yeah, probably. Maybe they're just 'friend' friends."

Roomie, in her ever-so-dry-retort, says "Yeah. Good luck with that."

Second quarter ... I (eventually) get the bartender's attention, tell him her next one is on me. He says, "Dude. You're barking up the wrong tree. She's into the ladies. Seriously. Into. The. Ladies."

I looked up and said "Yeah, story of my life. But she's hot as balls, give her the beer anyway."

She thanked me. The smile and the nod.

So later, as I again visited the used-beer-return and admired her hotness on the way in ... she stopped me on the way out.

"You're welcome," I said ... then added, "Nothing wrong with buying a beautiful woman a beer in a bar though. Can't blame a guy for trying, eh?"

She said, "Actually ... no. And I have to say you're what I'd go for if I had a single straight chromosome in my body."

My reply: "As Carl the Groundskeeper said, 'So, at least I got that much going for me'"

She roared in laughter. "I LOVE THAT MOVIE. I hope you find a night straight woman to make you happy."

My final parting comment, "Oh, I'd be happy with a bisexual one, too."

Yep, in a sports bar full of hot women, I managed to crush on the lesbian.

I got skills like that. Bitches be doubting, but I can prove it over, and over, and over again!
Spewed forth by Eric Broz at 00:27 1 comment:

Email ThisBlogThis!Share to TwitterShare to FacebookShare to Pinterest
File Under: My Life

"Fortress Around Your Heart"
Sting

Under the ruins of a walled city
Crumbling towers and beams of yellow light
No flags of truce, no cries of pity
The siege guns had been pounding all through the night
It took a day to build the city
We walked through its streets in the
As I returned across the lands I'd known
I recognized the fields where I'd once played
I had to stop in my tracks for fear
Of walking on the mines I'd laid

And if I built this fortress around your heart
Encircled you in trenches and barbed wire
Then let me build a bridge
For I cannot fill the chasm
And let me set the battlements on fire
Spewed forth by Eric Broz at 01:36 No comments:

Email ThisBlogThis!Share to TwitterShare to FacebookShare to Pinterest
File Under: Song of the Day

Hey, it's a repost. But it's a fucking great song. So suck it.
Clutter
~ Aaron Tashjian

It's a long road
Back to your house
And I don't know what to do
I am weary
And I'm nervous
And I'm not sure of anything at all
But the silver beams
From the tv screen
Make you look just like
A movie star right now,
Tonight

Email ThisBlogThis!Share to TwitterShare to FacebookShare to Pinterest
File Under: Local Music, Song of the Day

No, seriously. Fuck. You.

I get home. I try to eat food.

The sandwich was the driest, stringiest, toughest roast beef I've ever had. It made beef jerky appealing.

The potato cakes were double-cooked. How do I know this? They were dark brown, not golden brown, and dry as morning-after hangover mouth.

And the iced tea had no ice.

At least the Arby's sauce was good.