Happy Dog Cleveland is Dead To Me

There are very few thing I hate worse than piss poor band management by venues who book live, original music acts on a local, regional or national level. Because there are a great many people who like to see bands play original music, and who will hop in the car, dedicate a night, a few hours or a few hundred miles of drive time to go see a band they like who’s playing somewhere in their geographical reachable area. And usually it’s on a tight schedule … “If we leave by midnight, we’ll be home by 1:30 and I can sleep for six hours before work” kind of schedule. I’ve done it more times than I care to count, and enjoyed damn near every single lost moment of sleep.

And I’m not the only one. I have MANY, MANY awesome music-loving friends who’ve piled in cars, pinched pennies, scrounged for beer money and parking and tolls and cover charges and eaten the shittiest truck stop food to make the trek to see a band they love play live and spend the next day sore from sleeping in a car, cranky from not enough sleep in a car, and loving every minute of it.

Because most of the time, it’s worth the sacrifice.

To see the band. To live that moment. To be in that room. Whether it’s 20,000 fans at the arena; 15,000 fans at the amphitheater, 1,000 at the club or 10 of you in a dive bar, those are the moments where you connect with the music and musicians who matter to you, and nobody can take that away. It’s pure magic.

However, in the unlikely event of a water landing … when you don’t get to see the band through no fault of your own … shit get super serial. Super fast.

I’ve had any number of roadtrips cancelled for any number of reasons: Flat tire. Car problems. Work issues. Family crisis. Weather. Car accidents on your way to the venue blocking traffic for hours. Friends who promise and bail. Bank account issues. And honestly, I’ve had them all. And I hate it, but I suck it up, realize I missed them this time and promise to make better plans to avoid some or all of the above next time THAT BAND I HAVE TO SEE is anywhere near where I am.

But when the stars and planets align, and you have four working tires, good engine, you’re not working and not on call, have no family issues, beautiful weather, everyone is safe on the highways you travel, with a friend by your side and a positive bank balance with cash in your pocket and you get to the venue far enough in advance to get a prime seat or standing position close enough to satisfy your needs, desires and camera capabilities and the band you want to see isn’t playing until several hours AFTER their advertised time, and oh, they’re not the opener but the ‘closer’ now? Or they never play at all?

That, my friends, is a completely different story. And why I will never, EVER, go see a band at Happy Dog in Cleveland again.

About a month ago I got an email from someone who saw this here music blog, and knew it had a Columbus connection, and was playing the Tree Bar (great venue, great management) and asked if I’d share the word.  To be honest, I get, on average, 10 of these a week. Most of the time I have no idea who the band is, and they provide little to no information about themselves, their style, etc. They just want me to pimp their shows. And I listen to them, and don’t like them, and usually ignore the request, because if you don’t have anything nice to say, say nothing at all, right?

But Jeremy Porter was different. I read his email. He’s an old school 80s punk turned 90s rocker turned indie rock Americana guy. I dig that. That’s basically me. But with much more musical talent, as I learned after I went to his band’s website and listened to their music.

I liked it. Hell, I liked it so much I bought the new CD. Wrote a review. Promoted the Columbus show, the Cleveland show and the Pittsburgh show on this here blog, my other regular ass blog, and Facebook and Twitter. Because I really liked the sound of the band. Hell, I even created a Facebook event for the Cleveland show and invited about 60 of my Cleveland-area friends. Eight of which showed up at Happy Dog, Friday, April 5th at 9:00ish to see see Jeremy Porter & The Tucos.

And after paying our cover charge about 9ish, and having a few fine craft beers, and some food, and listening to 90 seconds of the soundcheck, we were wondering when the band was going to start. Because at 9ish the place was about 80% full. Now it’s 10ish and it’s 60% full.  And it’s 10:30 and it’s 50% full. And still, no music.

So imagine our surprise when at 10:45 the ‘headliner’ (Bill Fox who was with a band called The Mice from 85-88, disappeared until 96, and after a few years disappeared again, only to re-emerge in 2007 … yet I’ve never heard of the guy, so I wasn’t there to see him) starts playing. After a good portion of the crowd that was there an hour ago has already left the building. And nobody’s paying attention.  (Sorry, Bill, I’m sure in a different venue under different circumstances I’d like you. Hell, GBV likes you. And Robert does no wrong, so odds are I’d dig ya plenty, just not tonight, man. Sorry.)

So I walk the 10 feet from where I’m sitting to where Jeremy Porter is sitting. We talked, earlier in the evening, I told him I was excited to see the show and had like 8 people there with me. He thanked me for that, for my review of the album, the Facebook event, blah blah blah … the mutual admiration society rules were in effect and we called it a draw.  So as I walked up to him at 10:45, those rules were gone. I was upset about him NOT opening. And said that.

Then, when he answered, I left upset behind and became hot pissed when I found out he not only knew that they weren’t playing first, he was fine with it. Yet he never took the time to tell that to anyone via Facebook, Twitter, or, oh, yeah, that dude who came to see us and brought his friends sitting 10 feet away from me. That’s just a shitty thing to do to someone who just became a fan, and promoted your shit.

So we left. Two songs into Bill Fox’s set and without seeing anything but 90 seconds of Jeremy Porter’s soundcheck.  Because, after driving 75 miles one way, dropping about $100 in dinner, drinks, tolls, parking and cover charge, hoping to see a band I wanted to see play at 10ish because I had to leave by midnight because of work, it sucked to realize the band I wanted to see wasn’t playing until about midnight because the ‘headliner’ or venue or booking agent or whothefuckever decided that a 9 pm show should start with the alleged headliner starting at 10:45 and the alleged opener should start at midnightish or later, we left.

Had I known that was the timetable, I’d have said Fuck Jeremy Porter and Fuck Happy Dog I would have driven an extra two miles down the road to Brothers Lounge to see Erica Blinn and the Handsome Machine who was allegedly starting at 9:15 … and well, holy shit, they actually started at … wait for it … 9:15.

See, that’s a good venue. And a good band.

So fuck you, Happy Dog. And fuck you, Jeremy Porter, for letting Happy Dog fuck you, and fuck me and 8 people I brought to see you.

Go back to that state up north.
Spewed forth by Eric Broz at 01:09 No comments: 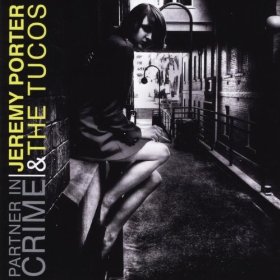 One of the cool things about a music blog that two or three of you read (Just Another Crappy Opinionated Music Blog) is hearing from artists who are putting out music that I might not find … the latest being Jeremy Porter & The Tucos. Hailing from That State Up North (but we don’t hold that against them), JP has been rocking and rolling the heartland in bands like The Regulars, SlugBug, The OffRamps, and Fidrych, as well as playing solo. He’s played Columbus before, sharing the stage with bands like Watershed and rocking out at Stache’s and the like … and now he’s back, with a new album, “Partner In Crime” and a mini Rust Belt tour that visits Ohio, twice: Thursday, April 4th, at the Tree Bar in Columbus; and Friday, April 5th at Happy Dog in Cleveland; and playing Rock Room in Pittsburgh on Saturday, April 6th.


The new CD, “Partner In Crime,” was released on New Fortune Records in March, and is a great piece of Americana. The 12 songs flow across 46 minutes of heartbreak, heartache, tales of falling for the pizza girl and lamenting about the one who got away. While those sound like pretty much every indie rock album, the music behind the songs, and Porter’s delivery, make them unique. From the rollicking “Pizza Girl” to sad-bastard “Barely All The Time” to the sadder-bastard “Wedding Day” this is a great collection of music, and I’m glad Jeremy brought it to my attention, and hope I can bring it to yours.  I know I’ll be at the Cleveland show … Come on out and support live music and hit the Rust Belt Tour!

Spewed forth by Eric Broz at 16:46 No comments: