It's time for Comfest again, and if you up to share a beer or band, feel free to find me at the following locations:

First Shift Friday, Saturday & Sunday carrying gear at Offramp Stage, which is very cool because we get free beer for volunteering and get to hang out with Meghan, my favorite photographer in Columbus (sorry, David & Greg, but at least you're in the top three!) and carry gear for cool bands.

As far as Before & After Comfest .... we've got nothing set in stone. Might hit up Little Rock or Patrick J's to see Colin Gawel or Ryan Smith (respectively) or maybe a little of both on Thursday, Friday it's Angela Perley & The Howlin Moons at Park Street Tavern and Sunday's wide open.

So ... there are my bands to pick for Comfest. Anyone I should see that I've missed?
Spewed forth by Eric Broz at 13:17 No comments:

Congrats LeBron fans, you got what you deserved

(Disclaimer: This isn't aimed at those of you I know have been dedicated Cleveland fans. It's more to the LeBron fans and those who couldn't tell you anything about four of other 11 guys on the bench, or the coach.  This is all about those "Early On The Bandwagon, Wave The Flag When We Win, Cry In My Beer, Proclaim Doom & Gloom When It Gets Bad, Time To Bail BEFORE They Lose" bandwagon fans that seemingly exist across all fanbases, but more importantly, whenever a Cleveland team has a shot at winning a title. That guy with the Manziel jersey sitting in the closet with his beat up original James jersey, the Heat jersey, and the new James jersey. The guy who is shitting his pants hoping Time Hop doesn't blast him on July 8th with "Five Years Ago Today" badmouthing LeBron, trashing the shrine & tearing down the posters. Yeah, I'm looking at you.)

I haven't watched the NBA with any real attentive passion since it was "Fan-Tastic."  Why? Several reasons:

1) The NHL moved from USA Network and small regional telecasts to local cable (KBL Entertainment Network anyone?) and satellite providers in the late 80's, then to ESPN/ESPN2. I prefer to watch hockey over basketball. All the action, more hitting, five minutes for fighting & none of the sneaker squeak.

2) I got tired of seeing the same teams in the finals. The NBA is, every season, a 10-team league with the rest of it resembling the Washington Generals more than 20 other viable NBA teams.

Your Western team was LA, San Antonio, Houston, Seattle/OKC or Portland 80% of the time.

Your Eastern team was Boston, Chicago, Detroit, Miami or Philadelphia 71% of the time.

3) And the biggest reason I stayed away in the post-Jordan era: Cleveland Fans. Scratch that. LeBron fans.

I'm accused of being a LeBron hater because I call him LeBum when he repeatedly fails to deliver. He's 2-4 in the Finals. Michael was 6-0. Jim Kelly went to four straight Super Bowls and lost them all. People still talk (well, before his cancer scare) about how he just couldn't win the big one.

I don't hate the guy. I don't understand wny some of you love him like you do, but I respect what he does in the community and for the less fortunate. He's a decent human as I see it. And while he may lead the league in every statistical category, this isn't Track & Field. The NBA is a team sport.

Dan Marino had, at one point in time, 13 NFL records. He was a great quarterback, but he never won a ring. He couldn't win the big game. Nobody remembers how amazing of a quarterback he was either. All they talk about is how he never, ever won a title.

LeBron's approaching that category. Yes, I know he has two rings, but he's also lost four times. There's that weird sports balance. Eli Manning has two Super Bowl victories over Tom Brady, but deflated balls aside, Eli's not better than Brady. Some people can rise above their record, some people are victims of circumstance on the good side. Like Eli.

Many of you live, breathe & die with your Cleveland sports teams. And their curse. I don't know if Moses Cleaveland tore his ACL when he stepped off the boat on July 22, 1796, at the mouth of the Cuyahoga River, but he might have. That would explain something about the tortured history of Cleveland sports teams since 1965. Maybe someone rolled his grave in Connecticut and woke up his spirit after Jim Brown retired. I don't know. Anything's possible.

But lets talk about now. Yes, it would have been a different series if Irving and Love were able to play and LeBron didn't have to (again) carry a Cleveland team through the finals (see 2007). But injuries are a part of sports. Nobody goes through at 82-game season and four potential seven-game series without injuries.

What cost Cleveland this title? I think LeBron was beat down by carrying the team as much as the weight of fanbase. Because carrying you #AllIn then #AllOut fans has to be heavy. I lost count on how many of you were talking TITLE in five, or six, and then giving up hope after each and every defeat. At one point in time, after Game 3 when Cleveland had a 2-1 lead, Golden State had only been ahead at the end of one of the 14 periods of basketball played: The overtime period of the first game.

After Game 3 all I heard was #ALLINCLE.

Then Games 4, 5 & 6 happened. And it was #ALLOUT and social media got super silent. Those of you who I mentioned at the top -- the true fans -- heaped your praise on your team, thanked them for a great season and started thinking about next year. The rest of you Lebron huggers? You just slinked back into the silence. Hoping nobody would take your seat on the bandwagon next season, when the Cavs are a 9-4 favorite to win it all. And you better hope they do, or LeBron might turn on you again. He can get out after next season. And he's done it before. 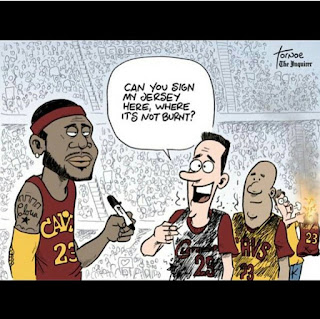 This guy stole your hearts, Cleveland, in 2003, when the NBA again rigged a draft (See Ewing, Patrick) so LeBron could play in Cleveland. He made you believe. He never delivered. That Cavs team that took you to the finals was worse than any Browns loss because the Browns never got blown out in a Super Bowl like the Cavs got swept by the Spurs.

And then, after two more disappointing seasons, he decided to "take his talents to South Beach," crushing your hearts in a nationally televised debacle that left fans burning his jersey in the streets, trashing shrines they'd established in their houses, man caves and garages, and crying in bars, swearing they would never have anything to do with him, or the Cavs, or the NBA again. He went to South Beach and declared they would win something like eight titles? They got two in four years with what was described as the best team money could buy while fans here either suffered in silence or started wearing LeBron Heat jerseys.

After realizing his time there over because that team was nothing more than LeBron & The Jamesanites, like Cleveland in 2009, he saw a bunch of young talent in Cleveland, got PR Smart in SI and told you everything you wanted to hear. Like that girl who cheated on you, or that asshole that got drunk and slapped you around one night, you heard what you wanted to hear from someone who crushed your dreams to forgive them and welcome them back with open arms. He said his time away taught him how to win, and now he wanted to share that with you. And he'd never break your heart again.

Because LeBron loves you, Northeast Ohio. Even though it was hard watching his jersey burn, and being railed by the owner he never told he was leaving. And being booed in his home court (despite the fact he was on the visitor's bench). LeBron really loves you. This time.

And apparently you're so desperate for championship you'll forgive everything he did, and forget everything you said, forget about the four years he was in Miami when the team you still supported won a 97 games combined while LeBron & company went to four straight finals and your owner was guaranteeing you'd win before they did. Remember that?

And that's why I'm not, and never will be, a LeBron James fan, or a Cavaliers fan. He may wind up with more points, assists, rebounds and burned jerseys than any other player in history, but when it comes to the big games, that's what matters. People remember who won, not who finished second. So far he's finished second twice as many times as he's won.

He's approaching 30, and Father Time is undefeated. He's played more games in the past five years than most guys play in a career. He's played 911 regular season and 178 playoff games. Add in 11 All-Star games and three Olympics, a bunch of world championships and exhibitions for Team USA. That body's got some wear and tear on it to wind up with two titles in 12 seasons.

Michael Jordan had five in his first 12 years with the Bulls and six in 13 seasons overall. He waited six years for his first title, while it took eight years for LeBron to get his.

Magic had five in his first eight seasons and went to the Finals nine times in the 12 seasons he played before contracting HIV.

Larry Bird had three wins in his first seven seasons.

I don't see LeBron as the Greatest of All Time or the The King of anything. If he gets a title in Cleveland he'll be a legend, if not, just another guy who came close but couldn't quite get there. If he leaves again? All bets are off.

But whatever, I'm just a hater because I pay attention to people and facts.
Spewed forth by Eric Broz at 18:00 No comments: